Designed specifically for racing, the sleek 21″ sloop rigged Micro Magic features molded ABS plastic hull and deck, carbon mast and booms, adjustable keel, and ready-made ICAREX single panel sails with carbon battens.  While technically a one-design sailboat, the  Micro Magic does afford the builder some discretion. The placement of the two allowed servos is unrestricted. The size of the sails (up to a maximum size) is likewise unspecified and after-market sails are permitted. The hull and deck may not be modified, and manufacturer’s  parts must be used for keel, bulb and rudder.

NOTE: Graupner, the original manufacturer of the Micro Magic, was recently sold and the production of  Micro Magics suspended while the company is relocated. Production by the new owners, Graupner/SJ, has resumed and is available online through shop.graupner.de. While some features of the Micro Magic have been slightly modified, and may   improve performance, the design rules will not be changed. The new Micro Magic will be offered in kit form and as a ready to run model sailboat. 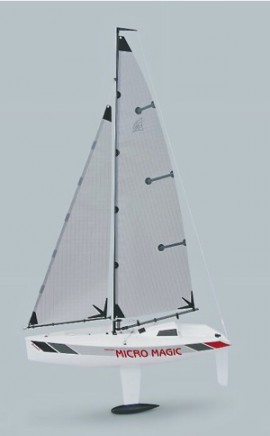 The design of the Micro Magic is the work of Thomas Dreyer, an IOM and Marblehead sailor who wished to create a smaller more affordable model that would sail as well as the large racing models. His original design was a model yacht small enough (at 21″ in length) to require only two servos but large enough to sail well, with a wide and full hull for stability, a keel-stepped mast, a removable keel, and the hull and deck left unjoined. The keel and rudder were to be injection molded plastic, and the deck and hull molded ABS plastic. The performance of his 1997 prototype exceeded expectations, and Graupner put the Micro Magic (small wonder) into production in 1998. A modified version was offered in 2006, the Racing Micro Magic. While maintaining Dryer’s basic design, the 2014 Micro Magic will incorporate features of the “Champ,” a racing model sailboat developed by Michael Weston of RC Yachts in the UK. Photos of the original Micro Magic  are shown in our Micro Magic Gallery.

There are two sets of design rules for the Micro Magic: German design rules that favor continued experimentation and development of the Micro Magic design, and a more structured one-design approach adopted in the Netherlands and now used worldwide. The Dutch rules have been adopted by the multinational Micro Magic Class, Micro Magic International,  and are available at the Class web site as International Class Rules. The US Micro Magic Class, established in 2008, uses the multinational rules, and offers its members plans, tips, and construction and sailing resources at its web site.

Expertise in building and sailing the Micro Magic is available from both sides of the pond at two onine forums (registration is required to post comments): USA Micro Magic Class Owners Association Forum, and the forum hosted at the Micro Magic International Class web site.